It's Been A While.

It's been seven years come March since I last sat down and wrote on these pages, it wasn't that I didn't want to write anything, I was just out of the habit so to speak. You know what its like, I was moving house and changing my job slightly back then, and that took me off in a different direction for a while.
I've very often thought over the last few months of getting the blog back up and running so here I am, I just hope that some of you are still about to peruse my mumblings? So where do I start?
I'll kick things off with a tale of an afternoons Perching trip to my local canal, pre winter while I was waiting for the Gt Ouse chub to hopefully fatten up.
It was a Thursday afternoon, the weather had been changeable to say the least, and I remember checking the forecast on my phone over the latter end of the previous week. low pressure was upon us, thick black clouds were being swept by with the increasing winds and intermittent heavy downpours but I had booked the afternoon off so was adamant that I was going regardless of the conditions, I'd just have to chance my arm and if need be, hang on to the brolly if things became to bad to angle without (I hate using umbrellas).

There's a particular section that draws me back, a section that I grew up on as a young lad, spending most of my school holidays and weekends there during my early angling years, in to my teens and beyond. Anyway, the section of canal is a rather long pound, probably from lock to lock I'd guess at around 3 miles as the crow flies so all that swims could potentially be anywhere along its length. In the weeks leading up to this trip I had been trying my luck a little further up the towpath but had started to get the odd repeat capture so the decision was made to move a good half  mile or so and this is where I'll begin.
If possible I'll nearly always try to find a swim that gives me at least a couple of options as sometimes a quick change of tact can bring that one bite that turns your trip in to a successful one.
Marinas, far margin trees, bushes and brambles, but  more often than not I'll always try and find a marginal boat that has been moored up for at least a few days and if no one is present even better!

Minimal kit in the form of a lightweight chair in which I slip my pan net, a rod bag, small tackle bag and a small brew kit type bag that carries my bait.
Speaking of bait, the majority of my Perch trips are very often with light tip type rods 9-11ft so I tend to keep things simple with an old school worm and maggot approach. I'm bullish to a degree, a five pound mainline directly through to either a size 10 or 8 hook, a small running feeder bead with two rubber grip type stops determine  my hook link  length (that'll be the match lads squirming).
Two full Lobworms (just nipped off) are held in place with a red rubber maggot "simple"
Angling is all about the enjoyment, and I absolutely love fishing behind tip rods no matter the species I'm chasing, Perch, Chub, Barbel etc......

Anyway, back to the day in question.... If I can, I try and give myself a couple of hours continuous baiting before the witching hour (the last hour before dusk) very often the tips have not moved but as soon as that last 45 minutes to an hour arrives then things potentially start to come to life and this day was exactly that.
I remember sitting there spraying maggots, a pouch full down the side of the boat to my right margin, and a pouch full to the far bank bramble, right up on the far shelf, and it was at this point as the maggots were still in mid flight that rod on the boat took on a jig jagged, tell tale pull round.
The little 9ft wand is magical when playing a decent sized Perch, and from the off I could tell that I was connected to a good un. A typical feisty battle pursued but all went well and I soon had my first 3lb plus canal Stripe in the back of the net.
I unhooked and weighed her quickly, she was in perfect condition and at 3lb 2oz I was content, I then placed her back in the net and laid her down the margin to rest up.

It was now a little after 4pm, and I knew that my eldest was finishing work so I dropped him a text to say that I'd had a good fish and he kindly diverted to the towpath to come and find me.
Whilst Carl was on route, I rebaited the hook and placed the rod back down the margin  along side the barge and once again sprayed more maggot over the top, the far margin also received a pouch full plus a little lift n lower trick, I do this if the spot has been quiet and then give it another five to ten minutes and if it still doesn't move, I then wind in, check the worm and hook for debris before recasting.
Shortly after resetting the far side rod,  I had literally just screwed the lid back down on the brew flask when a quick sharp bite registered once again down the near edge, then it settled again and went quiet!
Three or four minutes later and there was no mistaking that something had taken off once again with my free worm offering?
The fight was short lived and soon my second chunky Sarge was being bundled in to the net, this turned out to being a little tricky as its sister was still in there. All went to plan though, I then unhooked, weighed and gave her a number of 2lb 12oz " fantastic"
My tea was near cold by now, but before sitting and taking the moment in, I once again rebaited both rods and shortly after that Carl arrived. " I've had another mate" he smiled and replied "Go on boy" 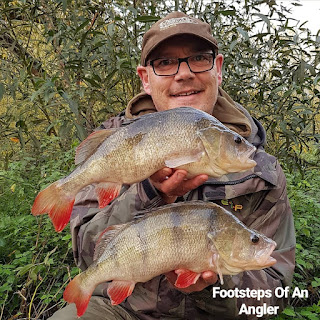 Back to the flask and we sat there chatting, catching up whilst having a cigarette when you've guessed it..... but this time it was the far margin rod that had been quiet since my arrival that sharply pulled round before falling slacker and slacker. On picking up the rod and feeling that initial head shaking I knew once again that a Perch was doing its very best to rid the hook. Carl looked at me, shook his head and said " You're a jammy git" I just laughed and said " get the net, but be careful"

On picking up the pan net to prepare for landing I could tell that he was a little like " what am I supposed to do here then?
Thankfully all went ok and a third was slipped in to the folds, high fives made and Sarge was unhooked.
The scales revealed 2lb 3oz and I muttered to boyo "that will do me for today"

With that the photo studio was set up, I quickly did my hair,  put my hat on and was soon smiling for the clicker before returning three glamorous stripes back to their watery home.

Me? Well I quit while I was ahead, myself and Carl said our farewells, I threw the kit back in its respective bags and made the short journey back home delighted with the outcome of the afternoons Autumnal events. 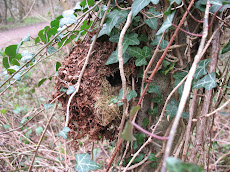 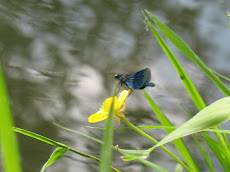 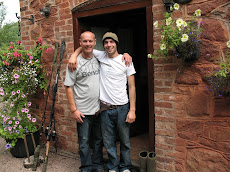 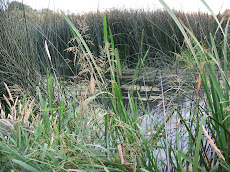 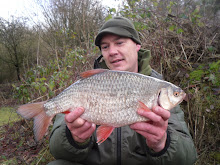 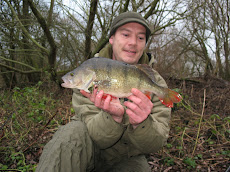 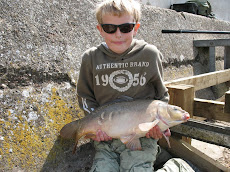 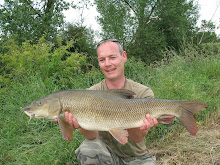 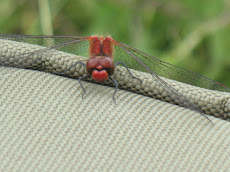 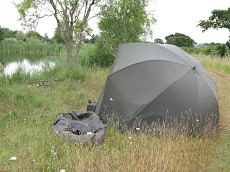 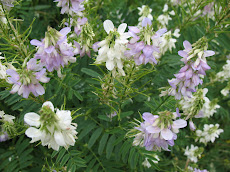 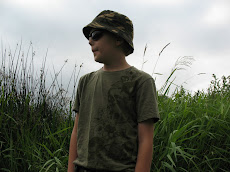 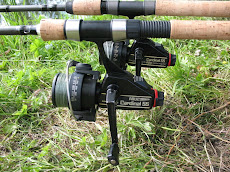 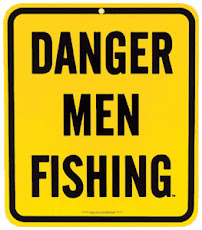 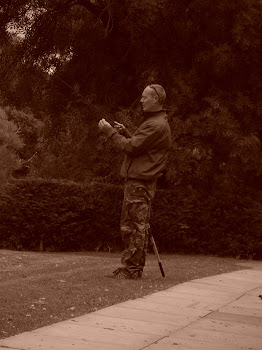 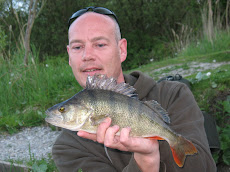 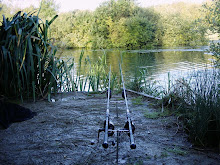 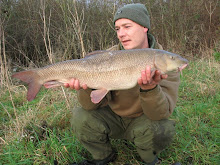 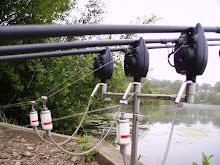 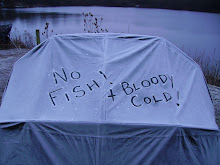 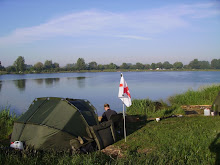 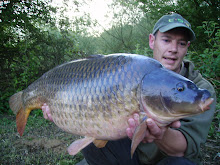 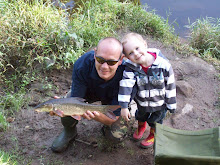 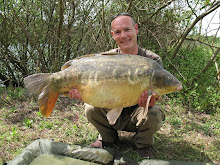 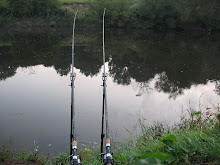 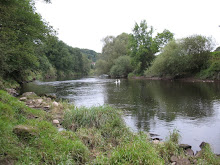